After having some trouble conceiving, Dr. Loomis and I were thrilled when we found out we were pregnant! Being small business owners, many of our patients knew the business was our “baby” for several years before we would even consider having a child of our own. But we finally felt we were ready for the rewarding challenge having a child would bring, and we are so delighted to share our journey with you.

My first trimester was plagued with typical “morning sickness”. Although I never actually threw up, I was nauseated 24 hours a day, and had to keep crackers by my bed for my 3 a.m. snack feedings. We knew it was a good sign of a healthy pregnancy though; so, once we reached week 13, we began to announce the good news.

The second trimester was impacted only by fatigue and weight gain resulting from being placed on pelvic rest at 28 weeks.

But I continued to receive regular chiropractic adjustments every other week that allowed me to stay active in life, even though Zumba was off-limits.

Near the end of the third trimester is when I truly began to appreciate my husband and his career choice. All that front-loaded weight gain caused a number of aches and pains -with my back, hips, pelvis, calves and Charlie-horse-ridden feet – to name a few.

During that time, I was adjusted every other day, and by the last week, it was every day up until labor began.

I cannot stress enough how much the adjustment did for my back pain. It was an instant release and the pain dissipated. So even with a 7-pound baby in tow, I was able to be active the entire time. 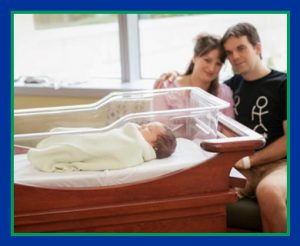 When my water broke unexpectedly at 39 weeks, I was devastated to learn that I would have to be induced. Many knew how adamant I was about doing things naturally, including steering away from Pitocin and everything to do with epidurals. When my birth plan got thrown out the window, I was in tears. What followed the next 7 1/2 hours was the most humbling experience of my life.

They started the Pitocin at 7 p.m. on July 20th. The doctor kept telling them to up my dose since I wasn’t in enough pain. Sometime between 11:30 and 12:00, the contractions ramped up to 1 1/2 minutes apart and lasted about 60 seconds in length. The pain was excruciating, and since my doula and friend had left for the night, thinking it would be an all-night affair, I ordered an epidural right around 6 cm dilation.

Dr. Loomis phoned both my friend and doula for backup around 1 a.m. After they arrived, the three of them combined gave me a renewed sense of hope and confidence that had been waning. I was willing to hold out on the medication and by some miracle progressed from 6 to 10 cm in the next hour.

So in the end, it was not just the chiropractic that helped me deliver my baby naturally with less pain. It was my amazing support system consisting of my husband, best friend and doula coaching me through each contraction and telling me how strong I was. It was the Bible verses they recited and the words of encouragement they spoke.

When I saw our baby girl, I realized I could never have imagined how much love we could have for someone.

Luciana was worth every ounce of pain and more. She has received a number of adjustments from her daddy already and is on her way to developing a healthy nervous system.

We believe chiropractic care is not just for adults – even babies benefit from it. Going through the birth canal is a traumatic experience for them! We want our daughter to get started on the right foot and live a life of someone who thrives.

Chiropractic has been crucial to my quick recovery as well. Especially with breastfeeding, my shoulders, neck and pectoral muscles have taken a beating. Chiropractic care has allowed me to persevere through the challenges of breastfeeding and has helped restore my body back to its original state.

Thank you to all of our patients and amazing staff who have been on this journey with us both. Thanks for your encouragement and support, for all of your cards and generous gifts, for your genuine happiness for our expanding family. You are part of our family too and we cannot wait to introduce Luciana to each of you!