We are often asked by our wellness patients, “Should I get my child adjusted?” “How do I know if they are in pain?” The answer is always a resounding YES. Dr. Loomis has been adjusted since he was born, so he not only believes but has experienced the benefits of a healthy nervous system as he grew up. Check out the video below for more detailed information on this topic.

If you’re still are not convinced about wellness care, view a list of common childhood conditions shown to benefit from chiropractic care.

Pediatric Chiropractic Care Can Help With:

Read more about the importance of Chiropractic for children here. Schedule your child’s appointment today! 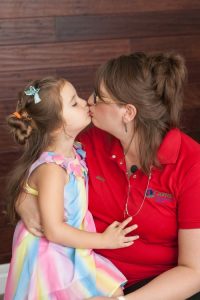 The benefits of chiropractic are widely known for adults, but some may not consider how those same benefits can be observed in children. Chiropractic care for children and infants has been done safely since the onset of the profession. The use of chiropractic on children has grown significantly over the past 20 years, with more parents bringing their children in for care.

Besides being safe, chiropractic care for children and infants has been shown to be effective in assisting with ear infections and nursing. Happier babies mean happier parents too!

Ear infections are the second most common reason for surgery in children under two. Many parents resort to surgical options for chronic infections.

Chiropractic has been shown to be effective in the treatment of these infections, removing the necessity of surgical intervention.

In a study conducted by Dr. Joan Fallon, 332 children with ear infections were treated with chiropractic adjustments.

After treatment, nearly 80% of children were free of ear infections for over six months.

Chiropractic works to remediate ear infections by mobilizing drainage of the ear in children, therefore preventing the buildup of fluid and infection.

Chiropractic has also been observed to help difficulties with breastfeeding infants. Feeding requires the proper functioning of the entire system of nerves, muscles, and bones, including the jaw, neck, cranium, and nervous system. Restrictions of movement in the head and neck can cause babies to struggle during feeding. Gentle chiropractic adjustment can help these systems work in harmony again.

In a case study presented by Dr. Hollerman, after chiropractic treatments, an 8-day-old infant was able to begin breastfeeding for the first time. Difficulties forming a latch were resolved after treatment. In another study of 114 infants conducted by Miller et al. (2009), 78% of babies were able to exclusively breastfeed after two to five chiropractic adjustments within a two-week period.

Chiropractic care is an important part of maintaining overall health through all stages of life, including infancy. According to Dr. Elise Hewitt, D.C., “A pediatrician delivers care in times of serious illness. A chiropractor is there for preventative wellness care and maintenance of the child’s structure. The two are very complementary.”

At Carney Chiropractic Center, we encourage you to consider the many benefits of chiropractic throughout all stages of life, including pregnancy and infancy. We hope you will give your own children the care that Dr. Loomis is giving his own daughter from birth through adulthood.

A 2007 meta-analysis of peer-reviewed literature by Vohra et al., found nine serious adverse events and five mild to moderate adverse events over a 110 year period of any physician performing spinal manipulation on children. That’s 14 adverse reactions out of million of adjustments over 110 years! In contrast, an average of 585,000 pediatric adverse drug events requiring medical attention occur each year.

Chiropractors have the lowest malpractice rates of all primary health care providers in the country, and those rates are based on risk. And as a pediatric chiropractor, my rates are exactly the same as my colleagues who treat adults.

“Every baby is born with an instinctive ability to suck. If the baby can’t latch on properly, there may be a communication problem between the brain and the elements of the suck-swallow reflex. I just get the joints moving again, clearing out the irritation of the central nervous system, which opens communication pathways that let the tongue and throat muscles work properly.” – Dr. Elise Hewitt